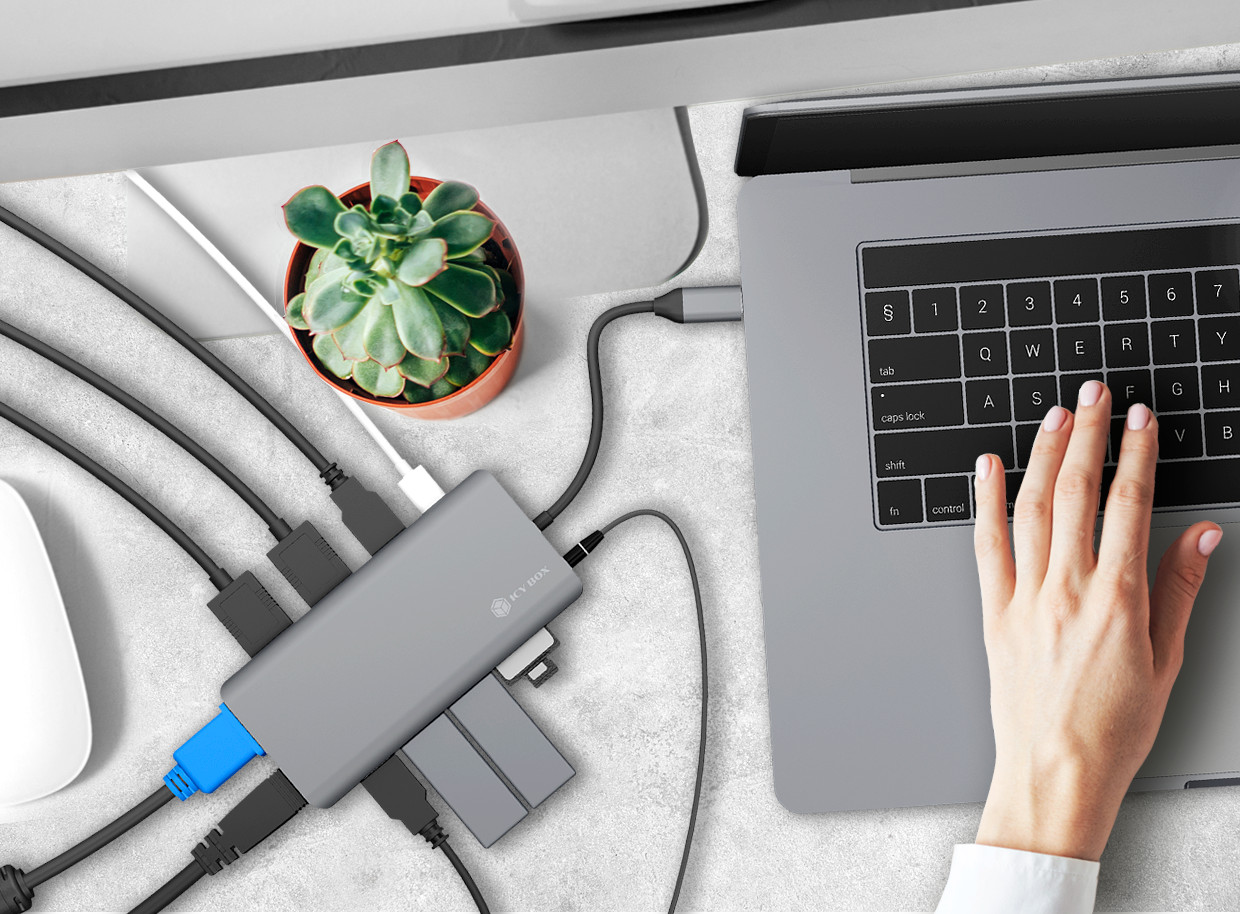 Ahrensburg, November 12, 2020 – Anyone who owns a current notebook will be familiar with it – important connections for existing IT peripherals such as printers, speakers and other USB devices are often missing as well as sufficient power for high graphic resolutions during video conferences from the home office. The versatile DockingStations from ICY BOX have been helping to remedy this situation for several years. The German-Taiwanese manufacturer now presents another mobile DockingStation, which can make the life of digital nomads much easier. The ICY BOX IB-DK4070-CPD impresses with its ability to connect up to three additional monitors simultaneously via HDMI® and VGA.

Almost every owner of a portable computer sooner or later misses one or the other connection possibility. Especially the operation of several monitors is a problem with the increasingly thin and less connection-friendly notebooks. By using both a DisplayLink™ and an DisplayPort™ Alt Mode chipset, the IB-DK4070-CPD can now easily extend your setup to three additional monitors – one monitor with resolutions of up to 3840x2160 at 30 Hz via HDMI® and two more with up to 1920x1080 at 60 Hz via the VGA and the second HDMI® connection. Of course, regardless of the operating system used, equally under Windows®, macOS® and Chrome OS®.

Anyone who has ever had to struggle with a slow and unstable WLAN at home in the home office or on the road in a hotel will appreciate the faster and at the same time securer Ethernet interface. Since this small all-round talent can also read both SD 2.0 and microSD 2.0 memory cards, the external card reader can now be left at home with peace of mind. And even if an elderly projector can only be connected via VGA during the important presentation, this little connection helper is reliable.

With the IB-DK4070-CPD, ICY BOX provides users with another flexible solution. Even the high-quality manufacture from carefully processed aluminium and the excellent design immediately catch the eye, as the versatile DockingStation not only lays well on the desk, but also in the hand. Even the USB Type-C® cable for connection to the notebook is already integrated and cannot be forgotten or even lost.

The Travel Docking Station is available now at a price of € 99,- (RRP) both online and locally from well-stocked retailers.