Modern notebooks without Thunderbolt - that may soon be a thing of the past. With Thunderbolt 4, Intel has taken the all-rounder among interfaces to a new level . But what distinguishes the specification from its predecessor Thunderbolt 3? In this article you will learn why so many manufacturers of mobile devices and notebook accessories rely on the new transmission standard and why a Thunderbolt 4 docking station should no longer be missing from your desk.

1) Why is it worth upgrading to Thunderbolt 4?

Notebooks and other mobile devices are becoming lighter and thinner. Therefore, manufacturers have to make concessions when it comes to the number of possible ports. This is where the multifunctional Thunderbolt 4 makes its grand entrance: It’s entirely your decision which devices you connect. The data transfer is significantly faster than via a USB specification. Thunderbolt is also more flexible and delivers pure data as well as video signals and charging power.

With a bidirectional bandwidth of 40 Gbit/s, Thunderbolt 4 has the same speed as its predecessor, but an upgrade is still worthwhile. Thanks to improved video data support, you can now connect two 4K displays or an 8K monitor to one Thunderbolt 4 port. In addition, PCIe transfer rates have doubled to 32 Gbit/s, so you can easily upgrade your notebook with an external graphics card (eGPU) or a video capture card, for example. Smaller devices such as smartphones or a lightweight laptop that requires less than 100 watts can be charged quickly and conveniently via USB Power Delivery.

Like Thunderbolt 3, Thunderbolt 4 is also connected with the USB-C port that most mobile devices are now equipped with. The ease of use is demonstrated by a backwards compatible function, meaning you don't have to upgrade your entire IT in one fell swoop. Just look for the cable or port with the Thunderbolt symbol.

2) What are the advantages of a
Thunderbolt 4 docking station?

Do you have a stationary workstation with an additional monitor and a larger number of peripherals where you regularly work with your notebook or tablet? Do you perhaps even attach great importance to a high LAN speed or the highest gaming performance? Then it's worth investing in a Thunderbolt 4 DockingStation.

This turns your mobile device into an ergonomic desktop workstation with a customised setup in a flash. Just plug in a single cable and you're ready to go: Use up to two displays, mouse and keyboard, graphics tablet, power connection, external hard drive, eGPU, headset or ethernet - according to your needs. With a total of ten ports, the Thunderbolt 4 dock gives you the convenience of a desktop PC without limiting the flexibility of your notebook. The main features of the hub and DockingStation are compared in the table below: 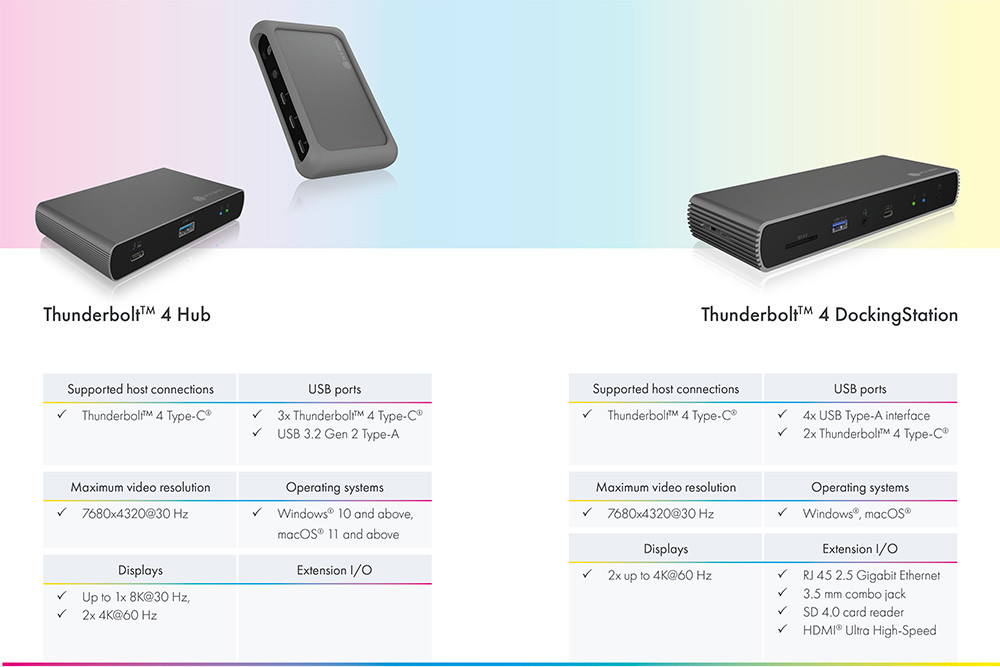 3) Next Level: The new Thunderbolt 4 dock
for the highest performance

A Thunderbolt 4 DockingStation equips your laptop with more connections and enables you to have an ergonomic workplace. If you work alternately in the office and from home, you can conveniently transition between your mobile device and desktop with just one flick of the wrist. At the same time, you can connect your tried and tested peripherals with USB-A and jack plugs, as well as displays with HDMI® and a LAN cable, because the DockingStation has all the ports that your new notebook has replaced with future-proof Thunderbolt technology.

Do you value the highest performance - whether in a business or gaming setup? Then we have the best solution for you: With the new ICY BOX Thunderbolt 4 dock you gain a total of 10 ports in addition to Power Delivery up to 96 watts:

Gamers in particular should pay attention to the keyword HDMI 2.1: This not only allows video signals to be transmitted in 4K resolution at 60 Hz, but up to 120 Hz is possible - perfect for high-end gaming! You are completely free to use two high-resolution screens with 4K@60 Hz, one with 4K@120 Hz or one with 8K@30 Hz. With a 2.5 Gbit/s LAN port, the new Thunderbolt 4 dock also creates more than twice the bandwidth with significantly increased data of a Gigabit Ethernet port. This appeals to family members who want to stream music and watch Netflix at the same time and others who are on a video call at the same time.

Still unsure which Thunderbolt 4 solution is right for you? Just give us a call or use our contact form! Together we’ll get the highest performance out of your IT setup.