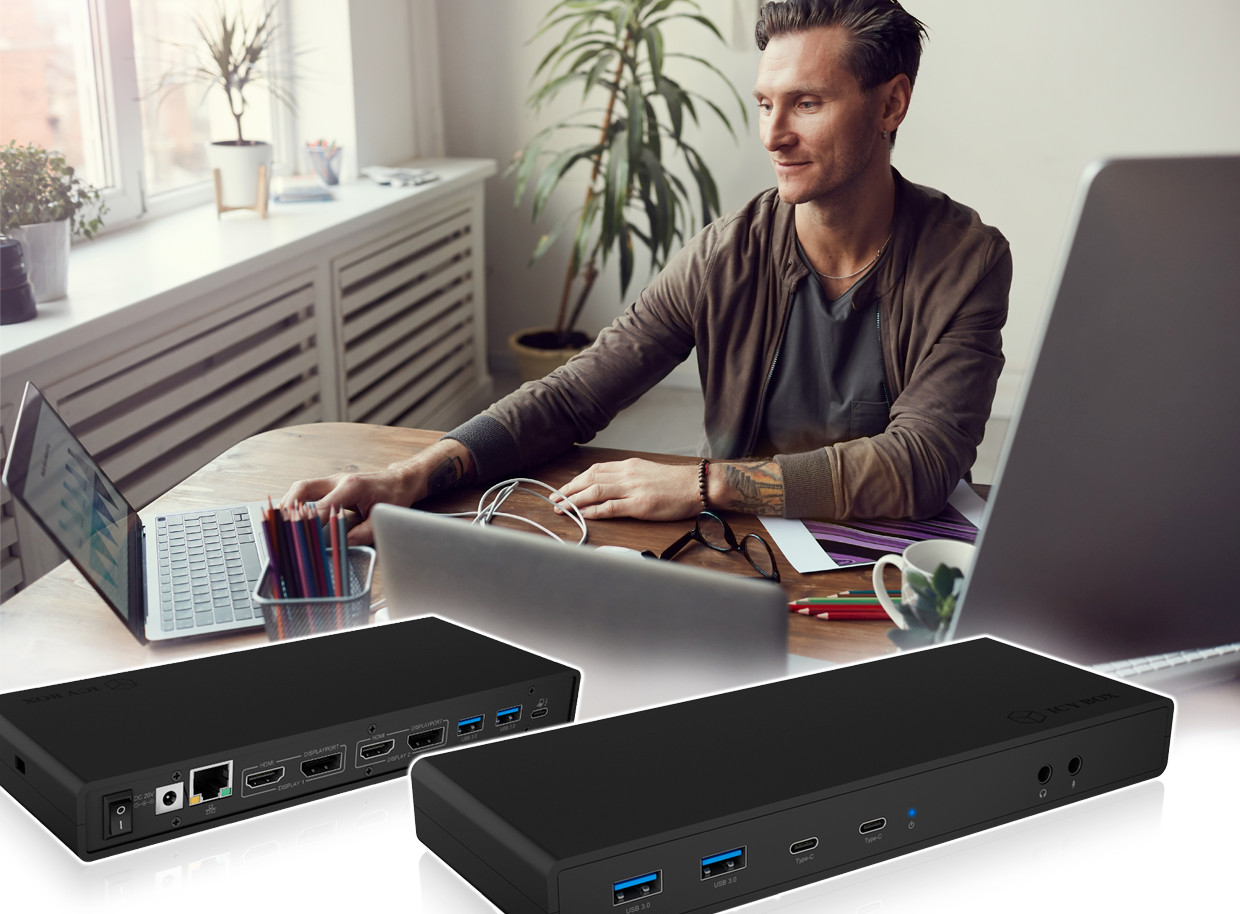 Ahrensburg, 01. December 2020 – Multimedia enthusiasts who are equipped with state-of-the-art notebooks will be thrilled to be equipped for the next shootings and video productions away from the office. Also, all those who, instead of the overcrowded but well-connected open-plan office, can go rein free with their creativity in the cozy home office, which is usually not equipped with the latest technology. Thanks to the new DockingStation from ICY BOX, both the existing IT infrastructure such as mouse, keyboard etc. and up to two monitors with simultaneous 4K output can now be easily and quickly attached to the notebook with a single Type-C® or optionally Type-A cable – and thus permanently eliminate the lack of connections of current notebooks. Once the IB-DK2245AC is linked to the computer and the latest Displaylink driver is installed (pre-installed under Chrome OS®), four video interfaces are immediately available for simultaneous display of 4K UHD, WQHD and Full HD content with a maximum resolution of 4096x2160p@60 Hz on two displays via 2x DisplayPort™ or 2x HDMI®, regardless of the operating system used (Windows®, macOS®, Linux Ubuntu, Android and Chrome OS®). If two monitors are not sufficient, the daisy-chaining support allows two more IB-DK2245AC to be chained together in series to drive up to six monitors. And if you need an even closer peek, you can even connect your 5K monitor via two DisplayPort™ cables. Smooth playback of HDCP-protected content for streaming or Blu-ray (under Windows®) is supported as well.

A host computer which is connected via USB Type-C® is reliably supplied and charged with up to 65 W from the DockingStation via the charging function, so there is no need for a separate power supply unit for the notebook, as long as it supports the power delivery function.

The high grade manufactured IB-DK2245AC has a decent design made of a robust plastic mix in matt-black appearance. The rubber feet on the bottom of the device prevent it from skidding and the Kensington lock facility prevents possible theft. Thanks to the on/off button, the DockingStation can be completely disconnected from the power source, thereby saving energy and protecting resources. The DockingStation is available now at a price of € 189,- (UVP) both online and locally from well-stocked retailers.